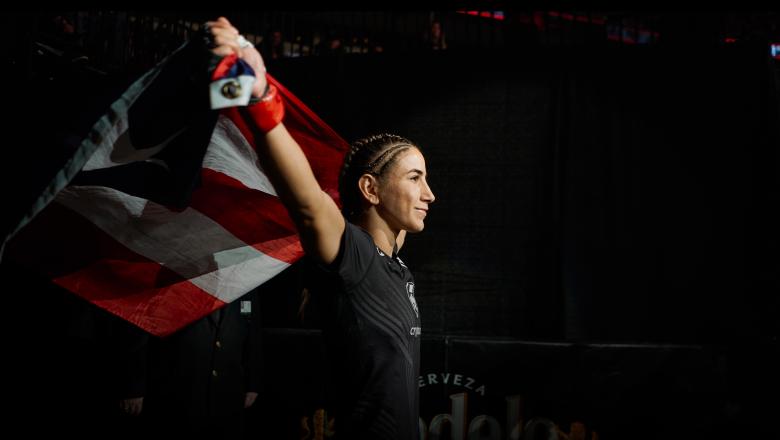 And at the age of five, Torres was already in the gym learning karate, following her dad to the dojo his friend owned.

“I was my dad’s shadow, so I went with him and I started there,” she recalled. “Then my parents separated, and my mom took us to Florida, and the one thing my mom promised would be that she would keep me in karate, so that’s why I started doing karate in Florida.”

She never stopped studying martial arts, earning a black belt in Jhoon-Rhee Taekwondo before moving to jiu-jitsu, then MMA. Today, she’s ranked ninth in the world at 115 pounds and riding a three-fight winning streak, most recently decisioning Angela Hill in their UFC 265 rematch in August.

That’s the day job resume for the “Tiny Tornado,” but it’s not the beginning and end of her story. Add in that she got her master’s degree in Criminology in 2017, studying while training for fights, her willingness to discuss her mental health freely, and her membership in the LGBTQ community, and the 32-year-old is one of the most well-rounded individuals you will ever run into. That’s something to be celebrated, especially during Hispanic Heritage Month.

“I feel like I am a role model to people and people look up to me, but I try to be as authentic as I can,” she said. “In the last two years, I’ve shared my battles with my mental health and when I preach things, I’m preaching it to myself and I hope I get that point across. We’re in this together and working on it. Yes, I’m telling you this, but I’m also telling myself this as a reminder.

“It motivates me to do better knowing that I’m telling you guys this because I want to live up to my words. So there’s the mental health aspect, and education is something I will always tell people to pursue. Education and mental health are very important. Being part of the LGBTQ community is important, as well, and being who I am and being authentic to myself is definitely something I stay true to.”