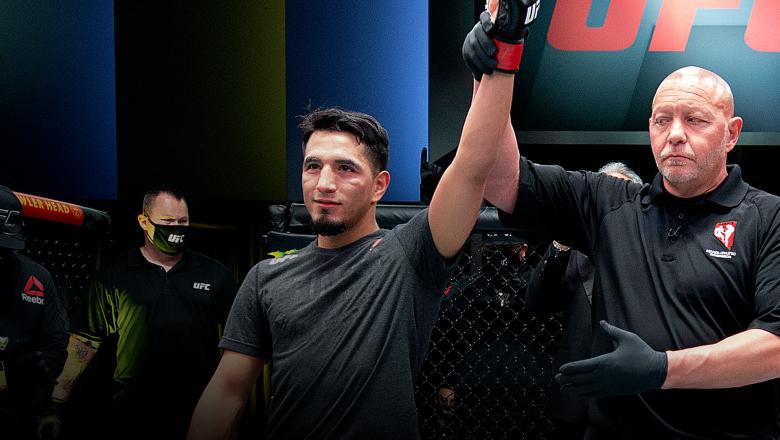 Closer to home, Yanez made sure he caught all the Legacy FC cards he could, because there, he got to see even more fighters who shared his Mexican American heritage attempting to fight their way to the big show.

“They (Legacy FC) had a lot of great Hispanic fighters, too, and a good one that I would always see coming up, he’s a Houston guy, too, was Daniel Pineda,” he said. “I was there when he won the title for Legacy. I was there for a lot of his fights and that was a lot of inspiration, too, because I saw a guy who wasn’t at the UFC level yet working to get there, and then he finally got his shot and goes on a streak. Unfortunately, he got cut, but now he’s re-signed with the UFC and that’s pretty cool to see how hard he had worked, got cut and worked his way back into it.”

In August of 2020, Yanez made his leap from the regional circuit with a 39-second TKO win over Brady Huang on Dana White’s Contender Series that earned him a UFC contract. Three more knockouts, all Performance of the Night bonus winners, over Victor Rodriguez, Gustavo Lopez and Randy Costa, made him a rising star at 135 pounds. And perhaps even more important, Yanez may be the Cain Velasquez for some kid hoping to become a pro fighter one day.

“I fully embrace it,” he said of being a role model. “It’s pretty cool that we have a little bit more representation now and I’m happy to represent. It’s amazing because now that the sport’s actually getting a little bit bigger and we’re starting to get a little more international, I love all the integration. Just the fact that I’m a Mexican American and fighting in the UFC, it’s cool. I get to represent my family every time I go in there, and it’s a proud moment for me.”

And no pressure, either.