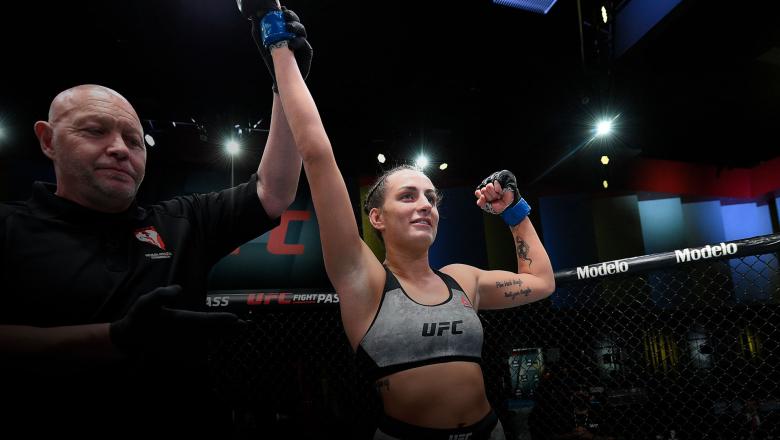 “I think I have very underrated striking,” O’Neill said. “I’ve been working on it for a long time, so I’ve never really been comfortable enough to throw it in fights whether that be nerves or anything, especially the Shana fight, I was very nervous, so I think that the ground being so comfortable for me, I went straight to that and showed that off, but I’m excited to show that I’m a well-rounded fighter this time and show off my striking.”

Perhaps it’s the circumnavigational trail O’Neill took, but the self-described “Scossie” (that’s Scottish-Aussie for the uninformed) looks at her MMA career with maturity that exceeds her age. She fights with the same energetic composure, and it’s why she is a bright prospect at 125 pounds, which continues to fill out with talent while Valentina Shevchenko reigns as its queen.

For the time being, things like rankings and title shots aren’t at the top of O’Neill’s mind. They are more a long-term goal with nowhere but up to go, and now that she feels settled both in the promotion and where she is training, it’s not hard to imagine her reaching those different summits. The next step comes on June 19, where she hopes to make good on all the positivity buzzing around her at the moment.

“I think that I have a lot of talent, but I think it’s very raw, as well,” O’Neill said. “I have been moving around a lot, so I’ve been picking up bits and pieces from everyone and sort of building my own game, and I’d really like to continue doing that and just become a very well-rounded fighter who, once I get to the top, I can’t be beaten, so I’m happy with slowly taking my time and building up that experience.”