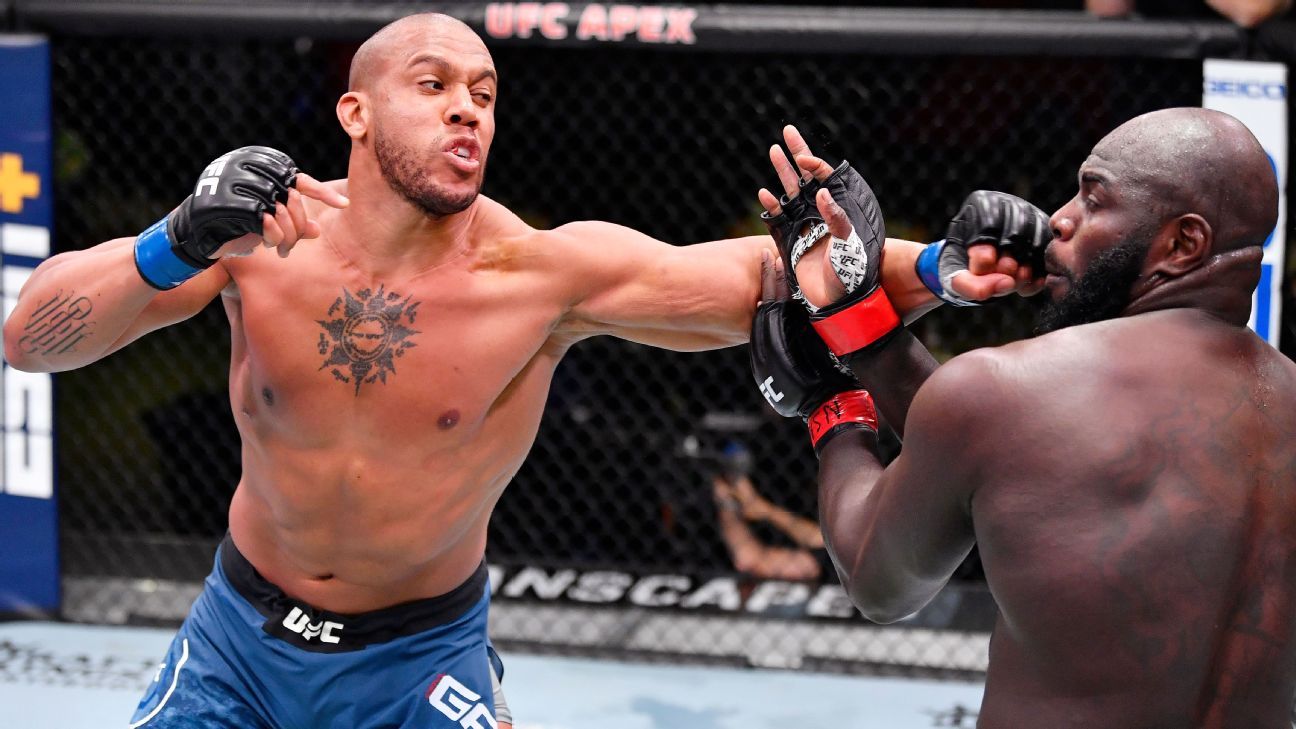 Ciryl Gane, the UFC heavyweight contender, picked up a critical notch in his belt. Ciryl Gane the budding UFC star? Maybe not so much.

Gane completely controlled Jairzinho Rozenstruik in a one-sided, unanimous decision win (50-45, 50-45, 50-45) in the main event of UFC Fight Night on Saturday in Las Vegas. But a lack of aggression and his conservative strategy could work against him when it comes to future UFC matchmaking.

“I don’t make a real big show for the fans,” Gane said in his postfight interview. “I got a big win, so I’m really happy for that. The guy was really tough. I just wanted to manage and I did it.”

No, Gane didn’t get the highlight-reel knockout that will go viral on social media. Nor did he engage in the kind of back-and-forth war that might make him a box-office favorite. But he did stay undefeated in the UFC against one of the top heavyweights in the world, showing his continued trajectory as a legitimate prospect.

Coming in, ESPN had Rozenstruik ranked No. 4 in the world at heavyweight with Gane ranked No. 8. Gane will certainly make a large leap in the rankings, but it’s unclear what that will mean in a crowded top of the division. The Frenchmen himself put some of the blame on Rozenstruik for the lack of action.

It might not have been edge-of-your-seat excitement, but Gane’s performance was impressive in its own right. He showed poise and calm, staying on the outside and picking Rozenstruik apart with long kicks to the legs and body. A few times, Gane waded in with big combinations and quickly retreated, staying away from Rozenstruik’s big power. But those blitzes inside were few and far between for Gane, who clearly wanted to exercise caution.

Rozenstruik was largely nullified. He landed a big a big combination in the third and some hard left hooks here and there. But nothing he landed was of significance. Gane’s excellent kicking and management of spacing was the reason. It was extremely effective, even if it won’t necessarily excite fans to tune in to watch him next time.

The card took place with COVID-19 protocols enacted at the UFC Apex, a facility across the street from the UFC’s corporate campus. It was the third UFC event this month headlined by a heavyweight contender bout.

Gane (8-0) came in as one of the top prospects in all of MMA and this performance will take him from prospect to bona fide contender. He is now 5-0 in the UFC with three finishes. Gane, 30, was coming off a second-round TKO win over former UFC heavyweight champion Junior dos Santos, at UFC 256 in December. Gane trains in France under coach Fernand Lopez, the former head coach of top UFC heavyweight contender Francis Ngannou, who fights Stipe Miocic for the title at UFC 260 on March 27.

Rozenstruik (11-2) was also coming off a second-round TKO win over dos Santos at UFC 252 in August. The Suriname native has won five of seven fights in the UFC. His only career loss before Saturday came against Ngannou via knockout last May at UFC 249. Rozenstruik, 32, has 10 KO/TKO finishes in 11 career wins. He is a former champion kickboxer.

Predictions! UFC 266 ‘Prelims’ Preview – Pt. 2
Costa Won’t Switch Camps Despite Plea From Silva
Brian Ortega on rivalry with Alexander Volkanovski: ‘I’ll fight you in the f*cking elevator if you want’ | UFC 266 Video
UFC 266 ‘Embedded,’ No. 5: ‘If you don’t take him out, you’re in for a long five rounds’
Bellator 266: Best photos from San Jose